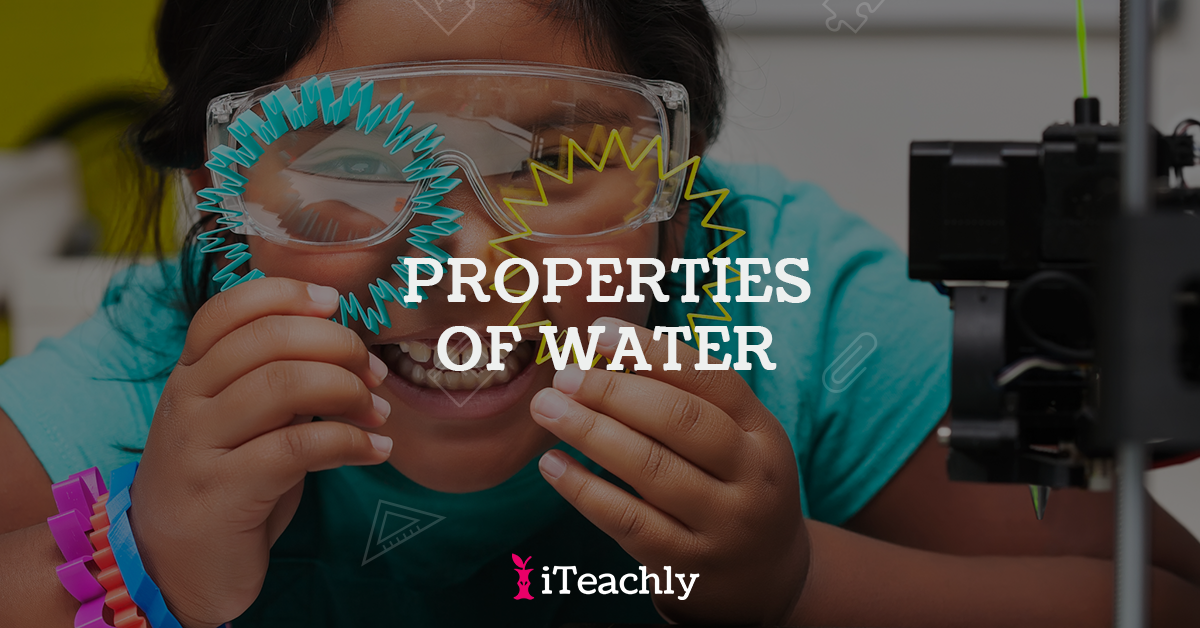 Why is Water Necessary?

Water is found everywhere on Earth; it covers around 70% of the Earth's surface in the form of rivers, lakes, oceans and underground water. Of these, the oceans represent approximately 97% of the total water present on the planet. Everywhere that water is found on Earth; life is also found. Therefore, there is little wonder that between 50% and 80% of all life forms exist in the ocean.

Water is needed for almost all of life’s processes, including:

The human body is made up of approximately 70% water. This value is an average measure of all the main areas of the body. The image below depicts the concentration of water in these areas.

Even those organisms which seem to be able to survive in very hot, dry climates still require water and have mechanisms which enable them to conserve this vital liquid. 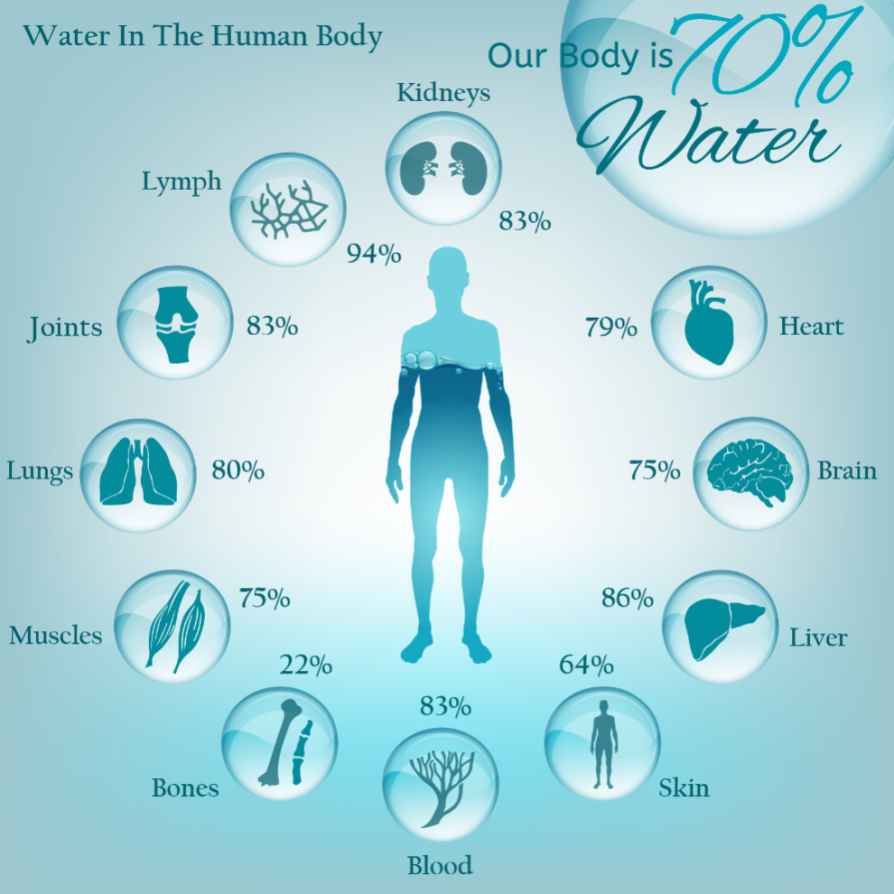 There are several properties of water which make it essential to living things. These properties include its structure and its ability to act as a solvent for almost any substance.

The Structure of Water

The water molecule contains three atoms; two hydrogen atoms joined to one oxygen atom; this gives it the chemical formula of H2O.  The chemical equation for the formation of water is shown below: 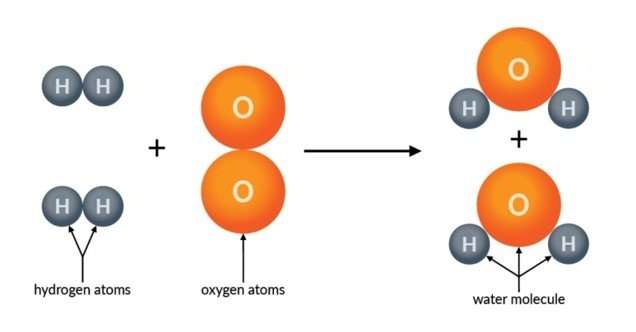 Oxygen has 6 electrons in its valence shell. This shell is only partially full and can fit up to eight. This means that oxygen must add two more electrons or find another atom which it can share its electrons with in order to become stable.

Hydrogen, in contrast, only has one valence electron. This means that in order to complete its valence shell it needs either lose that one electron or share it with another atom. In the case of water, hydrogen and oxygen share their electrons, completing each other’s valence shells and forming a single covalent bond.    This can be seen in the diagram to the right. 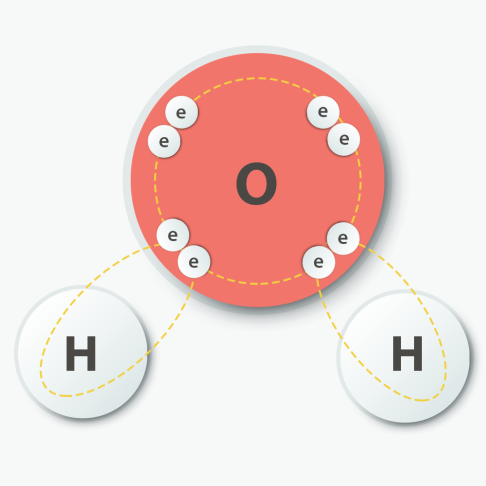 The Polarity of Water

The electronegativity of an atom is the measure of its ability to pull electrons towards itself. Oxygen is more electronegative than hydrogen. This means that in the water molecule, the electrons which belong to hydrogen will be much closer to the oxygen atom than the hydrogen atom.

Since electrons have a negative charge, and they are closer to the oxygen atom, oxygen acquires this negative charge. This also means that hydrogen acquires a partial positive charge since the electrons are further away from it. The difference in charge across the chemical bonds in water, therefore, make it a polar molecule. 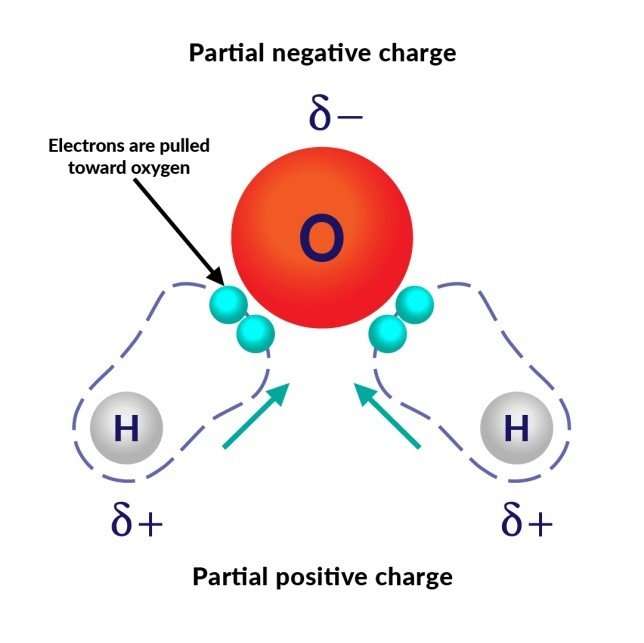 Water molecules show a bent molecular geometry. This shape occurs due to the arrangement of electrons around the central oxygen atom. Oxygen has two pairs of electrons in its valence shell and two single (unpaired) electrons. These two unpaired electrons are shared with two hydrogen atoms to form the covalent bonds in the water molecule.

Since electrons are negative, they repel each other. This results in the electrons in the molecule spacing themselves out so that they have the least repulsion between each electron pair, resulting in the bent conformation. 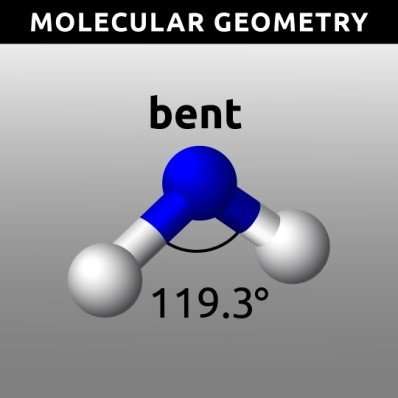 Not only are there bonds between the atoms within the water molecule, but there are also bonds which exist between the molecules. These are called hydrogen bonds and exist as a result of the partial charges on the atoms mentioned in the section above.

It is the hydrogen bonding as well as the molecular geometry, and the polarity or the high difference in electronegativity in the water molecule which gives water some its unique properties. 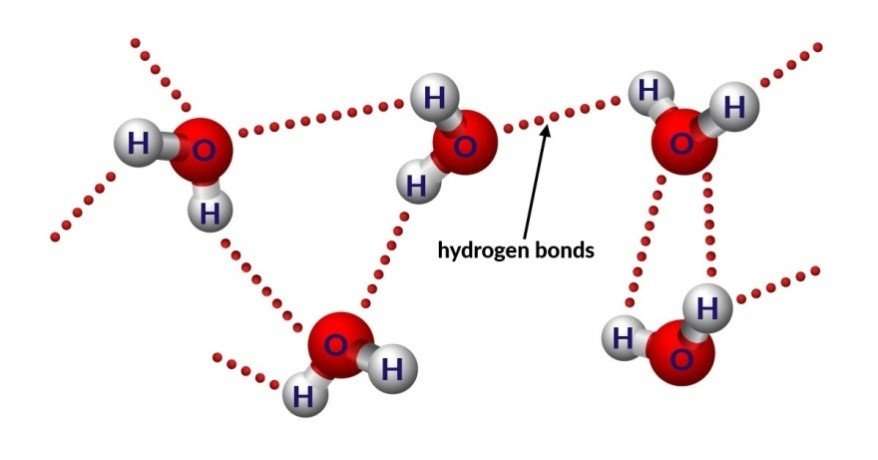 The Phases of Water

In nature, water exists as three states - solid ice, liquid water and as a gas - water vapor or steam. These states occur within a very narrow temperature range, all of which occur on Earth. Other substances may occur as a liquid or vapor on Earth but, their other states only occur in temperatures or pressures which would be too extreme for living organisms to survive in.

Methane (CH4) was initially thought to play a similar role to water as a universal solvent. However, methane only exists as a liquid in very cold temperatures (182 degrees Celsius) which much too cold for living organisms.

Ammonia, like water, is relatively abundant in the universe and is polar like water. However, scientists are yet to find any large amounts of ammonia anywhere in our solar system; therefore this has been ruled out as a universal solvent.

In general, as a substance cools and then solidifies, its atoms and molecules move closer together. The closer the particles are, the less energy they possess. 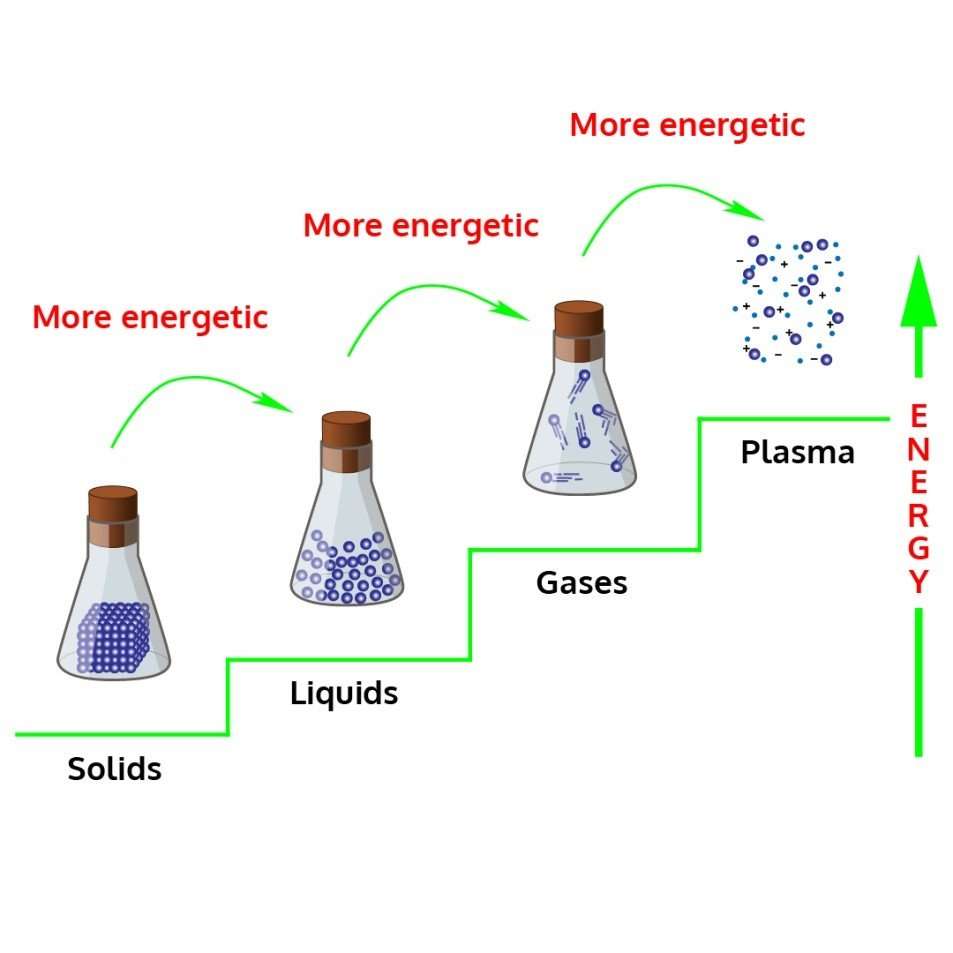 In the solid phase, water expands, and the particles move further apart. Coldwater, at 4 degrees Celsius is very dense and shows particles in more tightly-packed conformation than seen in solid ice. As heat is added, the water expands once more, and the molecules spread out.   This property explains why icebergs are partially seen floating on top of the water. 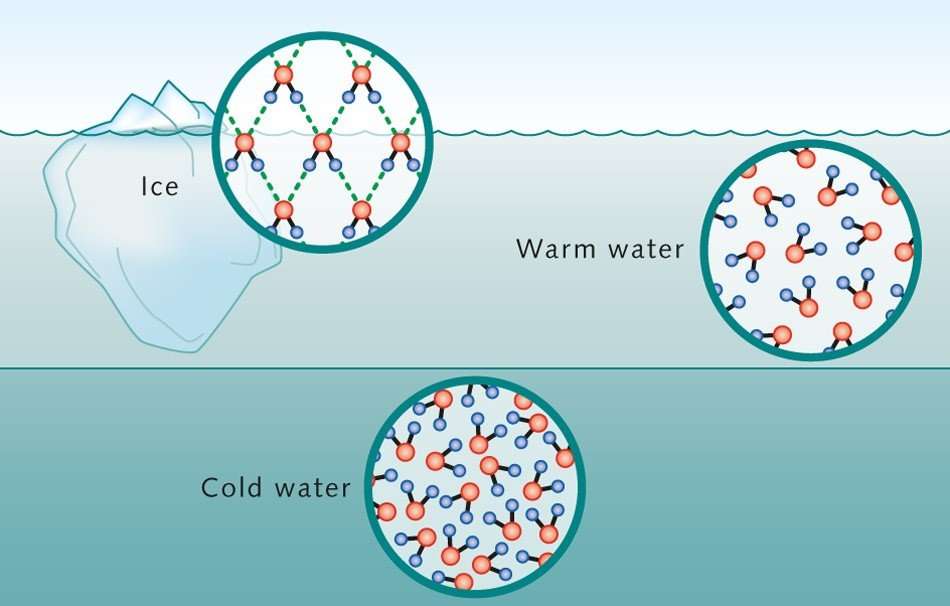 While freezing, molecules of water lose a certain amount of heat energy and move very slowly, making it easier for them to form hydrogen bonds. Their crystalline shape now is open and hexagonal which causes their increase in volume. The volume and density of water are inversely proportional. Therefore, as density decreases, the volume increases.

Oxygen is found in group 16 of the periodic table. In general, elements found in the same group show similar properties. 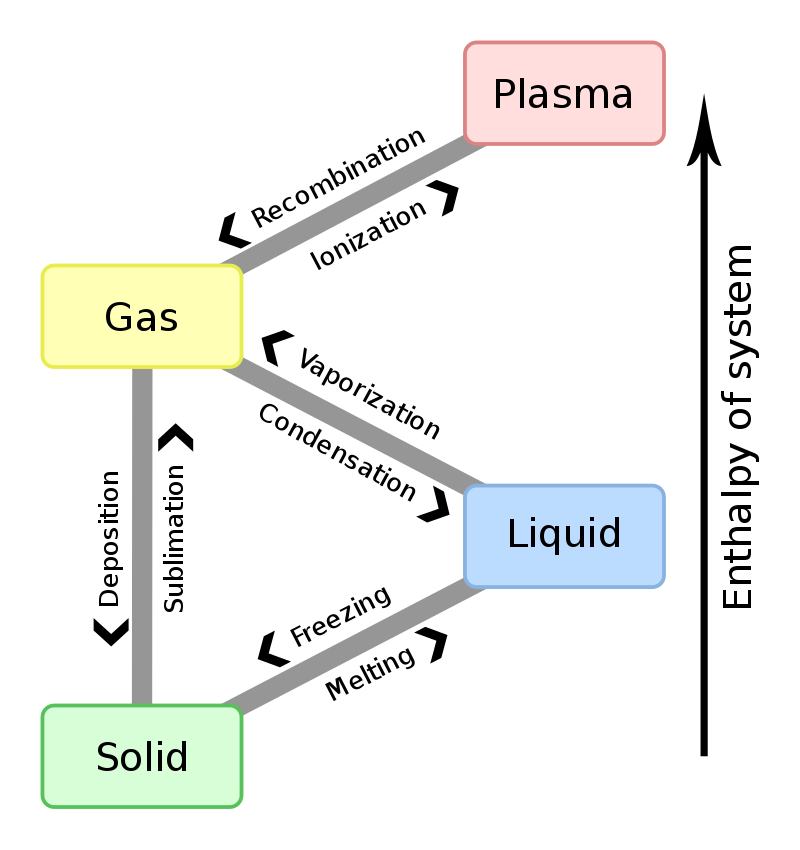 The table below shows the boiling and melting points for other group 16 elements when bonded to hydrogen.

Using this information, water should have a boiling point of less than 100°C and a melting point less than 0°C. However, water, at normal atmospheric pressure, boils at 100°C and ice melts at 0°C, which does not follow the pattern seen in other group 16 hydrides.

The abnormal boiling and melting points of water are due to the presence of the hydrogen bonds. These bonds require additional energy and must be broken before the individual water molecules gain sufficient heat energy to move apart and change state from ice to water (melting) or from water to steam (boiling).

The amount of energy that needs to be added to 1 gram of a substance to break its bonds and change its state is called its latent heat. This property makes water very resistant to changes in temperature and explains why it’s so useful for putting out fires. Therefore we can say that water has a high latent heat of melting and evaporation.

Specific heat is the amount of heat energy one gram of a substance must gain or lose to change its temperature by one degree Celsius. For water, this value is one calorie or 4.184 Joules which is the highest specific heat capacity of any liquid. 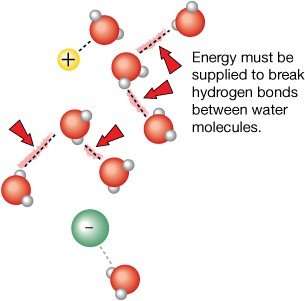 Water molecules stick together. This is called cohesion.

This is the attraction between molecules of the same substance. The cohesive properties of water cause the molecules on the surface of water to be drawn inward, which is why drops of water form beads on a smooth surface. Cohesion also explains why some insects and spiders can walk on a pond’s surface. This property also allows water to move through narrow spaces such as the roots and shoots of plants and the smallest capillaries in the human body as cohesion holds the column of water together as it moves. 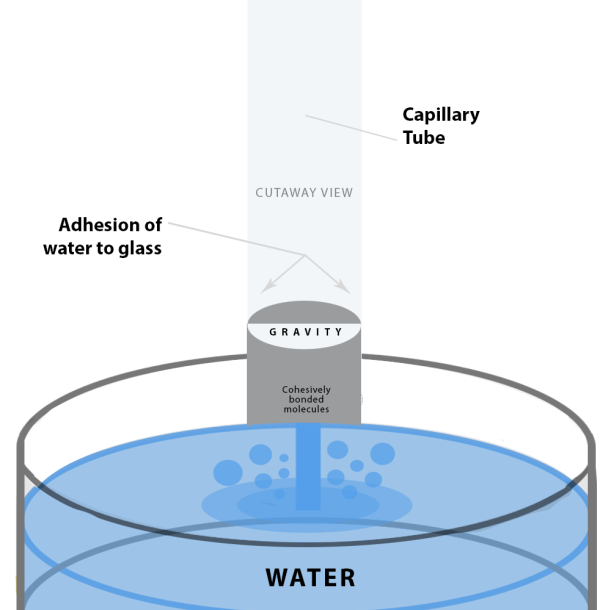 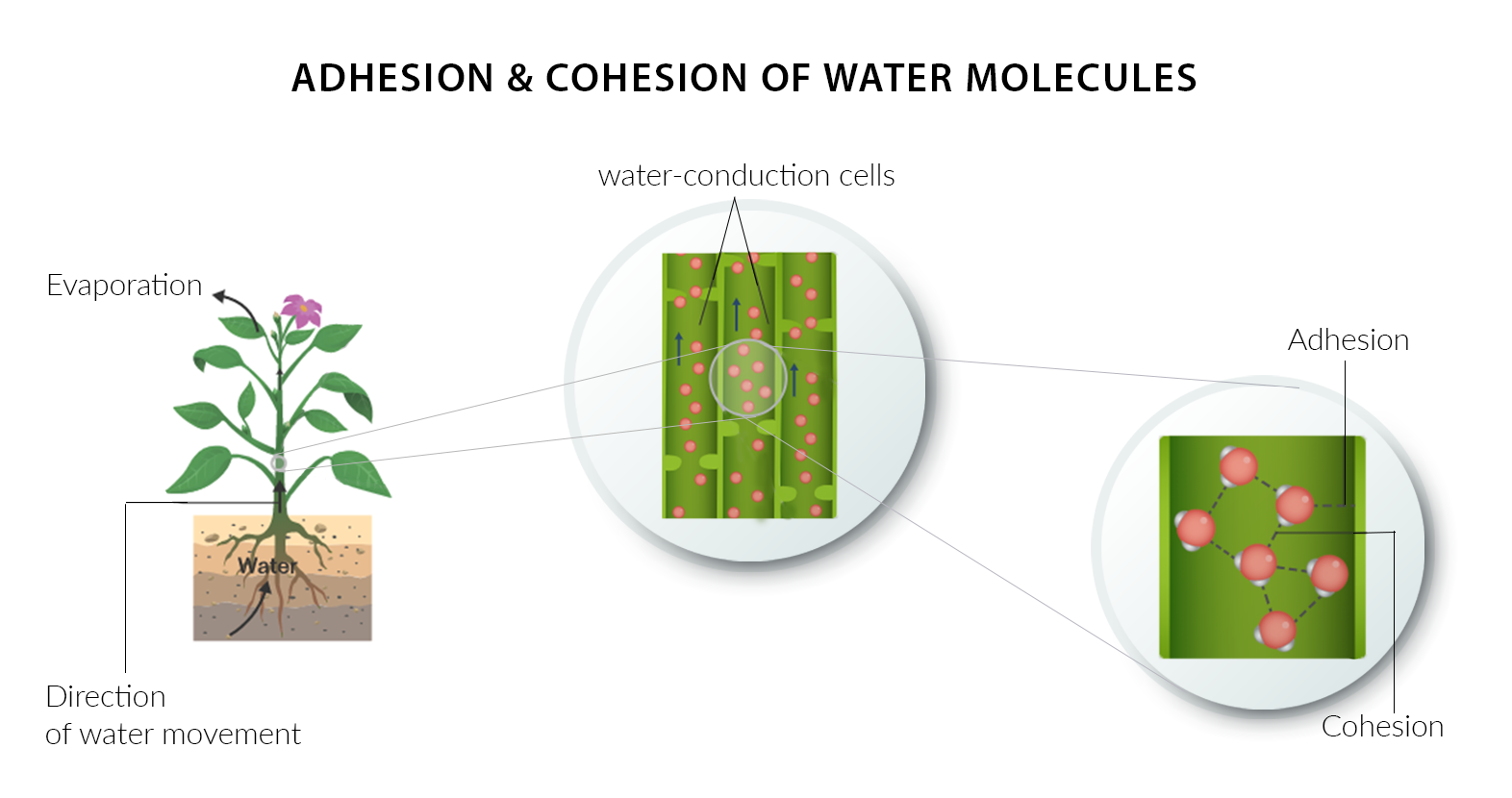 The cohesiveness of water is due to its hydrogen bonding. This gives it the highest surface tension of any liquid. Surface tension describes the ability of a liquid to shrink into the minimum surface area possible and explains why water exists as droplets rather than a thin layer. 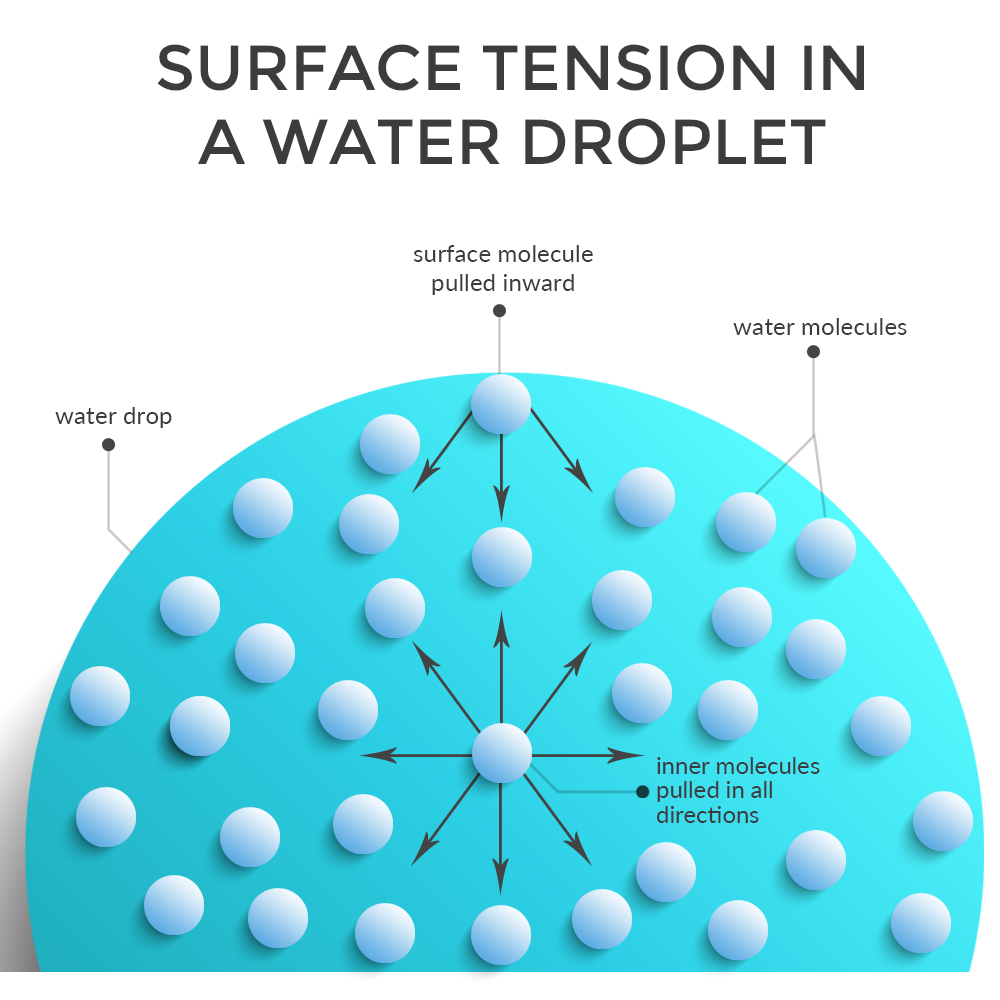 Adhesion between water and glass also allows water to rise in a narrow tube against the force of gravity. This effect is called capillary action and is responsible for pulling water out of the roots of a plant and up into its stems and leaves.

Water is not always found in its pure form, often occurring as a part of a mixture. A mixture is defined as the combination of two substances that are not chemically bonded together. Water forms two types of mixtures, a solution and a suspension.  A solution has its components evenly distributed throughout, whereas a suspension shows an uneven distribution. In many cases, the suspension must be shaken to redistribute the components as the solute (dissolved solids) will settle on the bottom of the container over time. 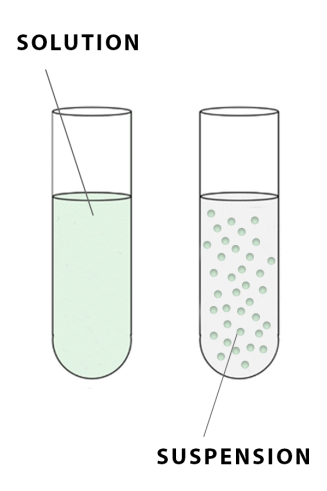 If a spatula of table salt (NaCl) is placed in a beaker of warm water, the sodium and chloride ions on the surface of the crystal are attracted to the polar water molecules. This causes the ions to break away from the crystal structure and become surrounded by water molecules. The ions gradually become dispersed in the water, forming a salt-water solution. In this example, the table salt is the solute, since it is the substance being dissolved. Water is the solvent –the substance in which the solute dissolves. Water’s polarity gives it the ability to dissolve both ionic compounds and other polar molecules, such as sugar. It is for this reason that water is often called the ‘universal solvent’.  Being the universal solvent enables water to carry substances such as essential ions (electrolytes) into and out of the cell. 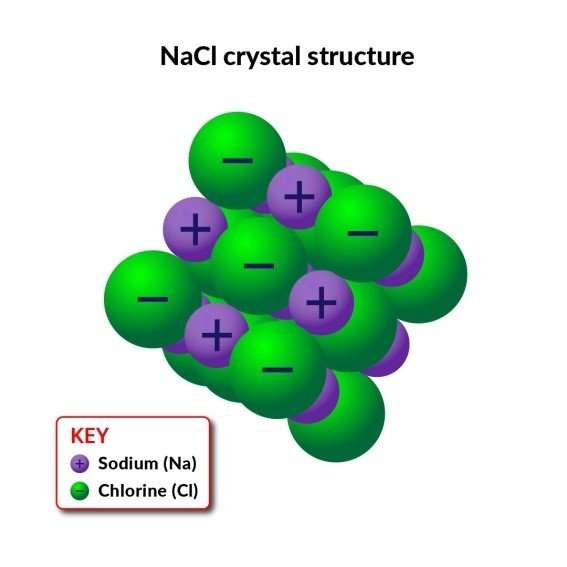 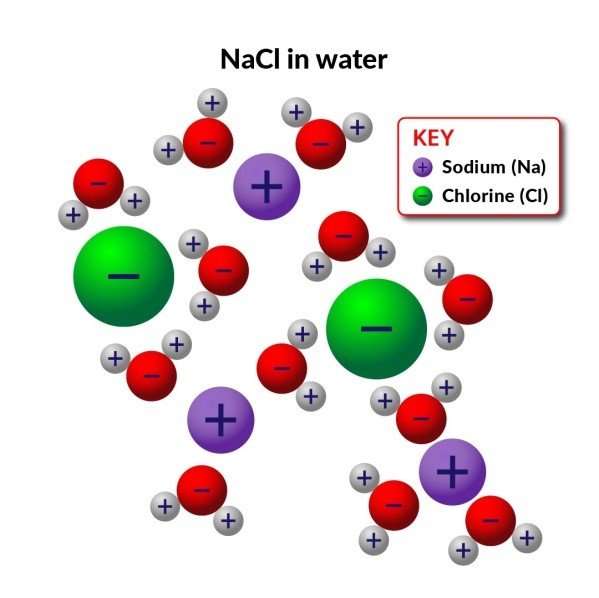 Water is a Neutral Substance.

Water is a neutral substance which means that it is neither an acid nor a base and has a pH of 7. Therefore, it does not affect blue or red litmus paper. This effect is due to the positive hydrogen ions being present in equal proportions to the negative OH ions. 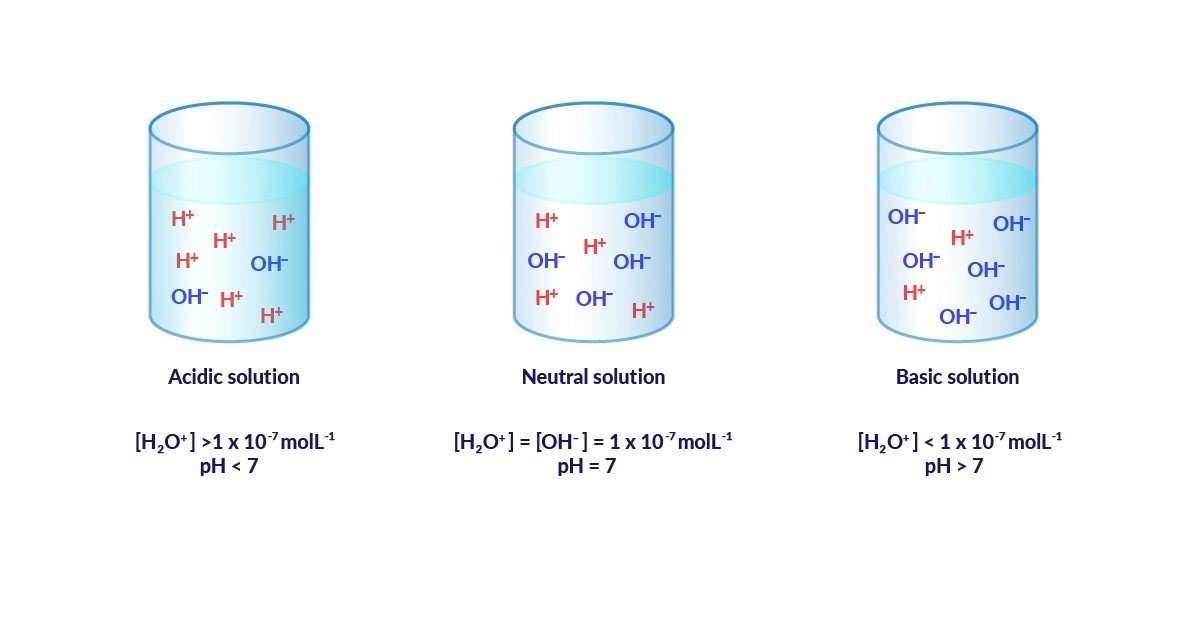 Here is your Free Content for this Lesson on Properties of Water!

Don't Forget to Pin this Lesson on the Properties of Water... 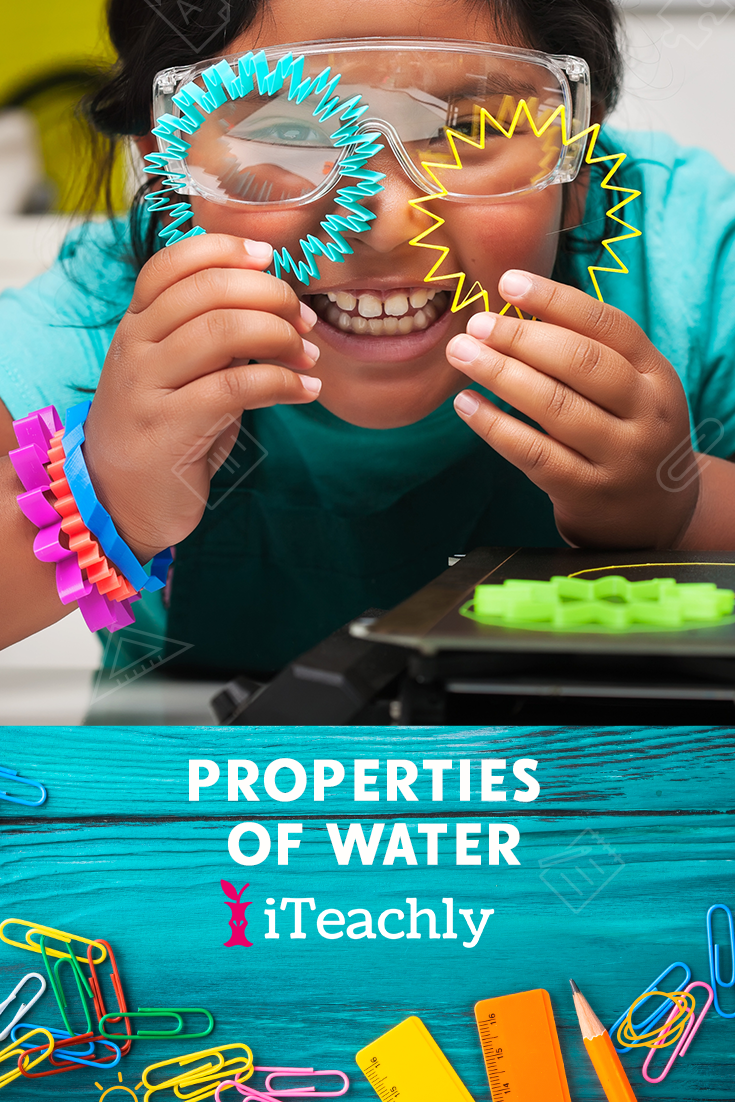