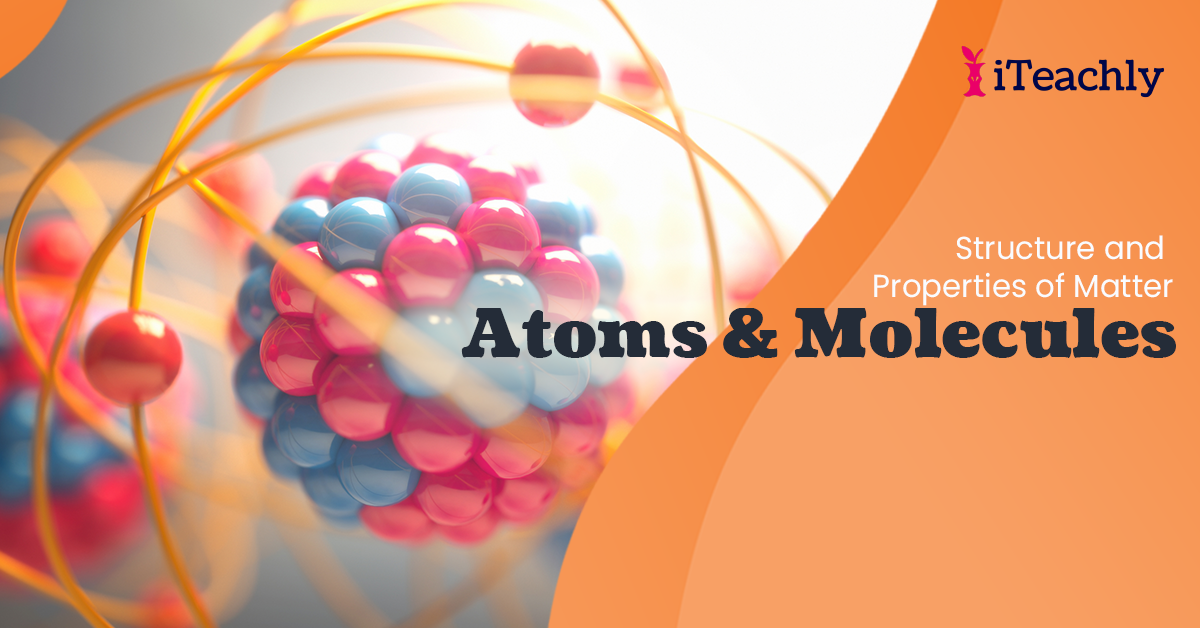 What is an Atom?

When starting your lesson on Atoms and Molecules make sure to start with the Atom and the changes that have been discovered. Atoms are the simplest building block of matter. Originally, it was thought that atoms were indivisible. However, we now know that an atom can be broken down further, although its chemical properties are not retained.  Therefore, an atom can be defined as the smallest particle of a given element that retains the elements chemical properties. For example, a gold coin is made up of a large number of gold atoms molded into the shape of a coin, with small amounts of other elements. Gold atoms cannot be broken down into anything smaller and still retain the properties of gold. A gold atom gets its properties from the tiny subatomic particles from which it is made.

Matter has mass and takes up space.  It is made up of atoms.

Because atoms are quite small, scientists use large models to explain the structure.

There are theories for the structure of atoms.

How Big Are Atoms?

Atoms are very small, measuring 10-10 meters in size. They are so small in fact, that when stacked, it would require millions of them to make a layer as thick as a sheet of paper.  The table below gives you an idea of the relative sizes of the radius of some everyday objects compared to the radius of a hydrogen atom:

The atoms of different elements can vary in size and mass, due to the number of subatomic particles and the number of electron shells they possess.

Early Models of the Atom

Key Points in this Theory

Many atoms cannot exist singularly and will, therefore, react with one another to form molecules. A molecule is defined as a collection of two or more atoms of the same or different element in a definite arrangement. The atoms in a molecule are held together by chemical bonds which can only be broken when a chemical reaction takes place. Molecules can be simple, consisting of only a few atoms or complex containing thousands of atoms. For example, the simple molecule oxygen is a gas found in the air we breathe. It consists of two oxygen molecules chemically bonded together (O2). By contrast, the carbon atoms in a 1-carat diamond weighing 0.2g contain 1022 atoms.

Some other common examples of molecules you will meet in this course are:

Molecules which contain different types of atoms are called compounds. All compounds are considered molecules; however, not all molecules are compounds. For example, in the image below, Hydrogen gas (H2) is a molecule, but not a compound because it is made of only one element. Water, on the other hand, is considered both a molecule and a compound as it contains more than one element - two atoms of hydrogen (H2) and one of oxygen (O). 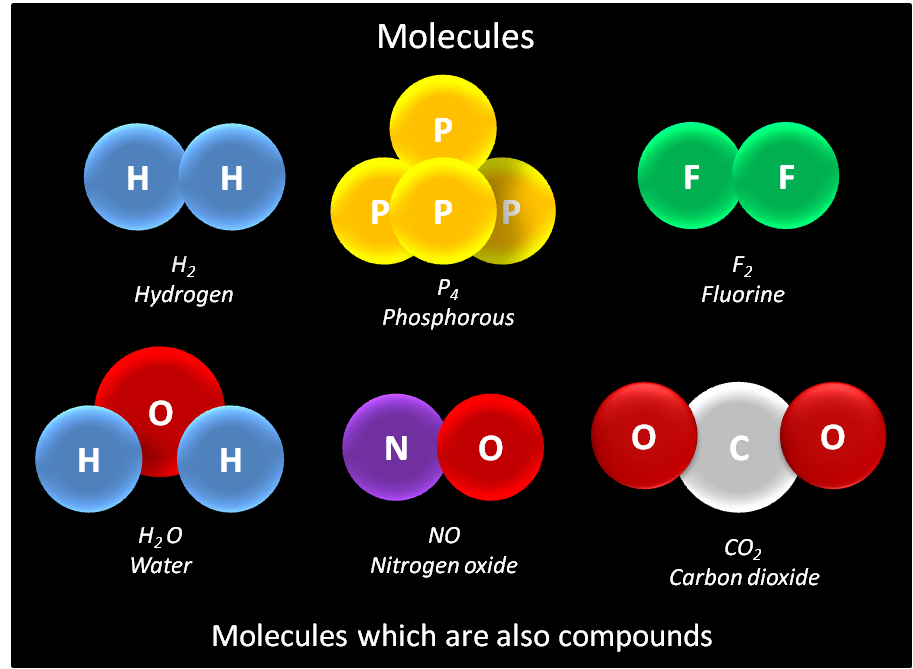 Counting Atoms in Molecules and Compounds

When working out how many atoms there are in a compound or molecule there are two numbers that must be considered: 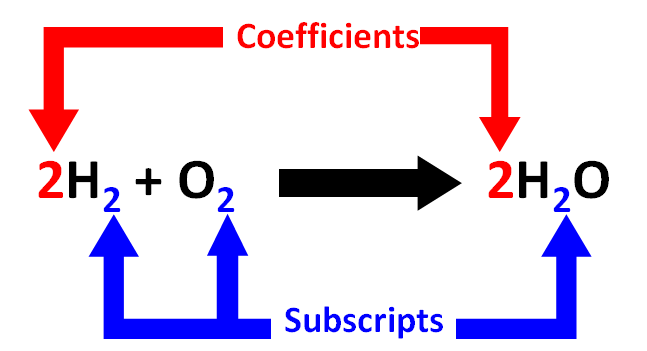 How to Count Atoms in a Chemical Formula (5 Easy Steps)

Step 1: Write out the chemical formula.

Step 3: Count the number of atoms of each element in one molecule.

Step 4: Multiply the number of atoms of each element by the coefficient.

Using the Particle Information below, complete each task.

Atoms are the smallest pieces of matter.  They consist of a central part called the nucleus and an area surrounding the nucleus called the electron cloud.  Atoms are also electrically neutral when all the particles are present.

Protons are one of the particles that make an atom.  They are found in the nucleus of the atom.  Protons have a positive charge.  1 proton carries a positive charge of 1. It is often written like this:  +1

Protons also have mass.  Called an AMU (atomic mass unit), the mass of 1 proton is used as a unit of measurement of mass in the super small world of atoms.  1 proton = 1 AMU.

Task 1:  Complete the following on the Atom Template.

Neutrons are one of the particles that make an atom.  They are found in the nucleus of the atom.  Neutrons do not have a charge.  They are electrically neutral, or 0.

Neutrons also have mass.  A neutron has the same mass as a proton.  Called an AMU (atomic mass unit), the mass of 1 proton is used as a unit of measurement of mass in the super small world of atoms.  Since protons and neutrons have the same mass, 1 neutron = 1 AMU.

Each atom has an atomic mass, which is the combined mass of all that atom’s protons and neutrons.  Protons + neutrons = atomic mass.  This number is the bottom number in each element box on the periodic table.

Task 2: Complete the following on the Atom Template.

Since atoms are electrically neutral, the number of protons and the number of electrons are the same.  For example if the atom has +5 protons, it will have -5 electrons.

Task 3: Complete the following on the Atom Template.

Use your atom template to answer the following questions:

Here is your Free Content for this Lesson on Atoms and Molecules!

Don't Forget to Pin this Lesson on the Atoms and Molecules... 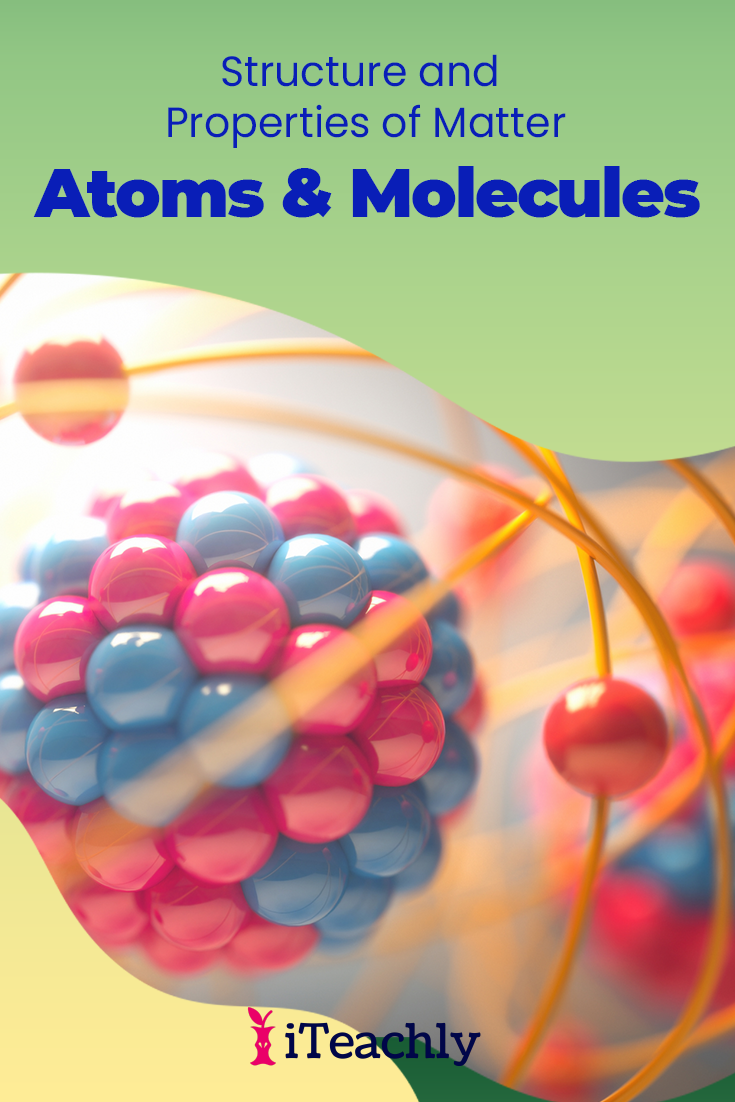